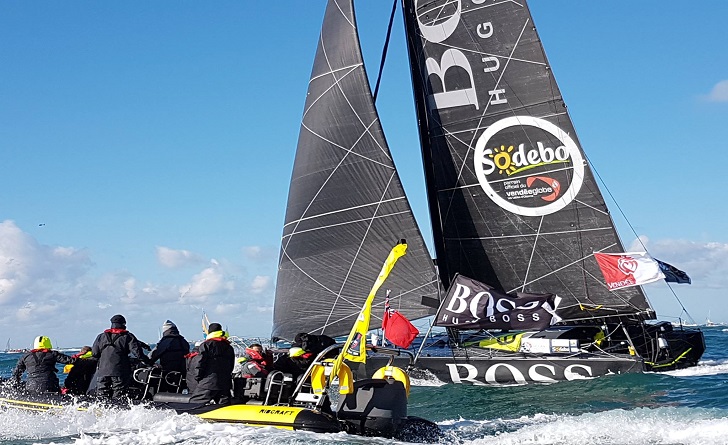 Alex Thomson crossed the finish line on Friday morning in second place in the 2016-17 Vendee Globe Round The World Race. He now has the second fastest finishing time in history.

“I’ve probably slept about five hours in the past three days and I haven’t slept at all in the last 24 hours so I was running on the final bit of adrenaline left in my body.” He crossed the finish line in 15 hours, 59 minutes and 29 seconds after winner Armel le Cleac’h finished in record time of 74 days, three hours and 35 minutes. The harsh conditions and route mean that almost 50% of all competitors who enter the race do not even cross the finish line. “Finishing this race is a result, but second is fantastic,” he said. Thomson and Dame Ellen MacArthur are now matched as the best British competitors in the Vendee Globe. Dame Ellen MacArthur finished second in 2001.

Alex had led the early stages of this race with a comfortable 100 mile lead before hitting a submerged object in the Atlantic Ocean in November. This collision cost him greatly as it ripped off the starboard foil, reducing the boats performance by about 20%.  Armel Le Cleac’h proceeded to take the lead and open the gap to nearly 1,000nm between them at Christmas. Alex fought on and gained speed rounding Cape Horn in South Africa, this was the start of his most incredible come back in the drag race home.  Alex then went on to smash the 24 hour distance record, his Hugo Boss Imoca 60 sailed 536.8 miles at an average speed of 22.4 knots or 25.7mph.  A new world record is sensational given the boat was damaged.

A true sportsman, Alex fought until the end and closed the gap in the final few days to just 34 miles between him and the leader Armel, with just 309 miles  left to race.

Congratulations to our competition winners! →
← Tasty menus for Cowes Week 2017