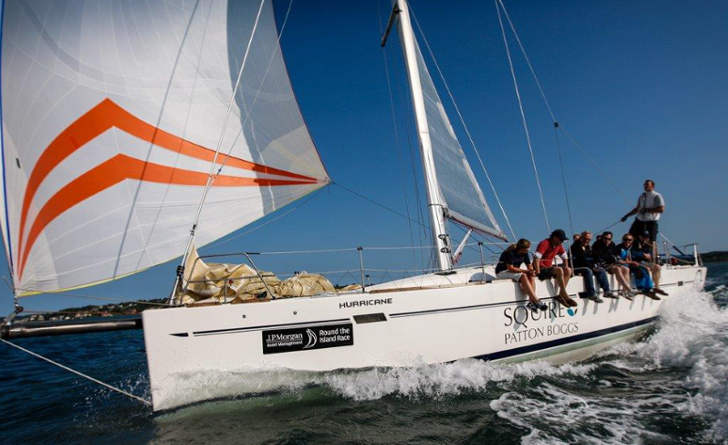 The J.P.Morgan Asset Management Round the Island Race was a resounding success for Solent Events this year with entries including ‘Hurricane’ for long term clients Squire Patton Boggs who always like something a bit special!

With Olympic Gold Medal winning sailor Pippa Wilson MBE as skipper and world renown Volvo Ocean Race navigator Jules Salter onboard, all that was needed was a bit more breeze for the silverware to be within their grasp. Having secured 2nd place in class 1 not once, but twice in the last 3 years they were out to win class, but this was not to be in the light airs that are not suited to this sleek 45′ cruiser/racer. In the end they settled for a respectable 9th place in this very competitive class with a mixed ability crew assisted by Solent Events pro sailors so well done guys and better luck next year (yes they have already re-booked!!!).

1584 yachts started the race this year and just 718 finished mainly due to the very light winds. The sun shone all day and with most finishing times around the 11 hours mark, a lot of very tired sailors came off the water mid-evening to enjoy a drink or two along with the entertainment in Cowes at the end of a long hard day!

Get in touch if you or your clients are interested in taking part in the race for 2015 which will be held on Saturday 27th June 2015.

Round The Island Race, It’s not too Late! →
← #Sailfie