On 6th November 2016, 29 of the world’s best single handed sailors set off from Les Sables d’Olonne on the West coast of France on the 8th edition of the Vendée Globe, the Everest of sailing.

The race, originally known as the Golden Globe, circumnavigates the planet going from West to East and allows no outside assistance or stops along the way. The sailors are able to return to the start and re-start the race within the first 10 days, but outside of this, they cannot take on spare parts or outside help other than advice from their shore team.

Sir Robin Knox-Johnston was the first person ever to complete this non-stop circumnavigation in 1969 in a race where 9 sailors set out but only he managed to complete the course. This magnificent achievement over 40 years ago took 313 days and in this time only 7o other sailors have managed to follow in his footsteps. Now the race record stands at just under 78 days and with new foiling technology in this edition, could well be reduced to the 70 day mark.

Sir Robin competed in a 33 foot wooden canoe stern yacht named Suhali (recently restored and can be seen sailing on the Solent!). Today, yachts are 60 feet long and comply with a few rules regarding keel and mast type with regulations on stability and safety. Other than this, the sponsored teams go all out to develop the fastest boats they can whilst keeping in mind that the boats will be racing in the most inhospitable places on earth in conditions that would make most of us turn green if we were on a huge cruise ship!

Your author has been fortunate enough to witness the start of this wondrous event on the last 2 occasions whilst skippering a Rib for sister company Solent Rib Charter. A reported 300,000 people lined the banks of the Carnival Canal (image below) that leads out into the infamous Bay of Biscay and the Atlantic Ocean beyond. A visitors centre in the large event village attracts over a million visitors over the duration of the race with amazing engagement from the French public who may never set foot on a yacht in their lifetime. Regardless of this fact, this sport is embraced wholeheartedly by an astonishing amount of people that come from all corners of the country to cheer on a race that has 20 of the skippers representing France. Sadly there are no women taking part this year, but past editions have seen our very own Dame Ellen MacArthur DBE, Dee Caffari MBE & Sam Davies take part with Ellen taking 2nd place in back in 2000. 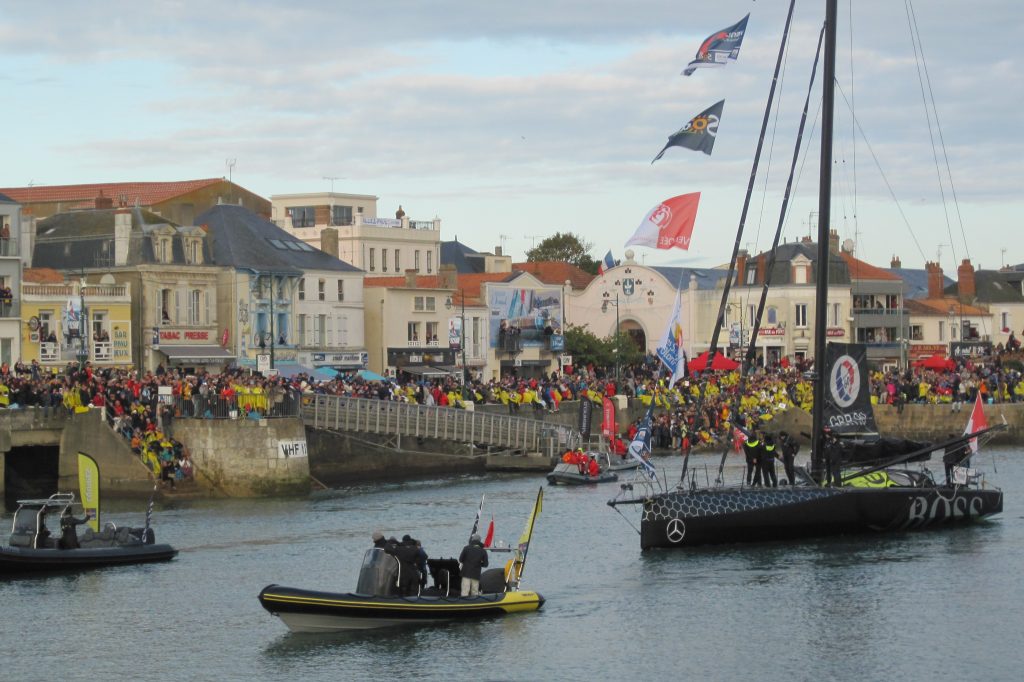 Solent Rib Charter were supporting Alex Thomson & Alex Thomson Racing for the race start with their Hugo Boss sponsored latest generation ‘rocket ship’. This 5,000,000 euro entirely carbon fibre yacht was designed by VPLP/Verdier and built in Southampton by Green Marine using similar technologies to Formula 1. Some 40,000 man hours went into perfecting this serious contender that has the latest foils projecting either side to add 2-4 knots of boat speed in the right conditions. As this blog is written, Alex is currently in 2nd place having led for most of the 3 weeks since the start of the race. Recent damage to one of his foils is now affecting the speed of the boat whilst on port tack giving Armel LE Cléac’h (2nd in the last 2 races) the opportunity to sneak in front for the time being. 7 of the 29 entries have retired so far through mainly keel and mast damage and if past history is anything to go by, there’ll be more before it’s all over.

We wish a safe race to all taking part and hope that Alex can bring home the silverware for Britain!