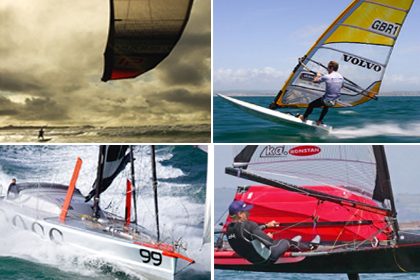 Set a reminder for the Volvo Sailing Speed Challenge later today from 16.15hrs.

The ‘Fantastic Four’ challengers are Olympic sailor Paul Goodison onboard a foiling moth, Olympic Windsurfer Nick Dempsey, Alex Thomson on Hugo Boss and extreme Kite Surfer Sam Lutman Pauc. The four will be competing with their range of sails to cross the Royal Yacht Squadron finish line first, to claim £1000 for their chosen charity.

Kicking off with Shirley Robertson hosting the ‘pre-race banter’ on the Parade Stage at 16.15hrs, the race will start at 17.00 off the Green with live footage streamed on all three event screens.

Ahead of the race you can vote on who you think has the fastest mode of sail. If guessed correctly you will automatically be nominated into a prize draw to win an exclusive ‘four ball’ at Wentworth Club, one of the most prestigious UK golf courses. Go to the Volvo Speed Challenge webpage to place your bet – on Paul, Alex, Nick or Sam.

One not to miss this Cowes Week!

Less than 2 weeks until COWES WEEK! →
← The Clipper Round the World Race